Upstream oil and natural gas employment in Texas grew in October, with 2,800 jobs added for the month, according to state data. 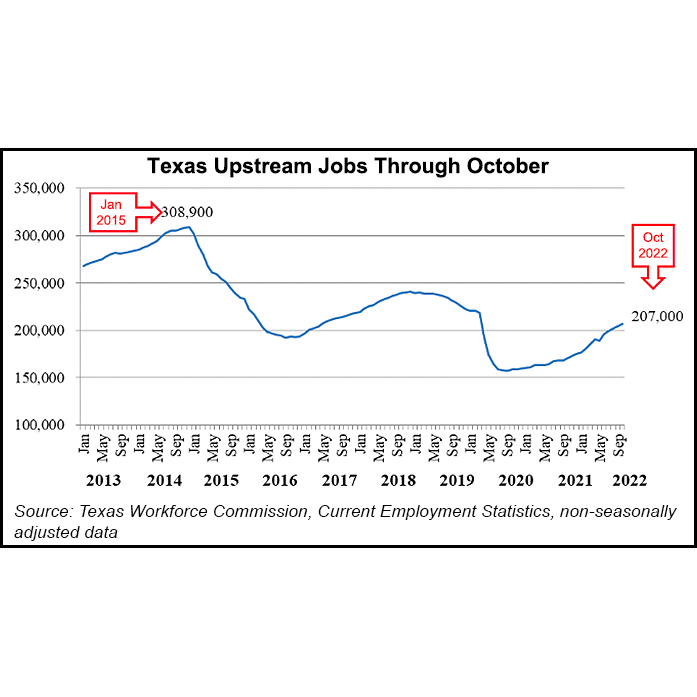 The gains in oil and gas extraction, as well as support jobs, were even more impressive after the Texas Workforce Commission (TWC) revised upward the job gains in September to 2,200 from an original estimate of 900. The TWC tally of upstream employment excludes refining, petrochemicals, oilfield equipment manufacturing, pipelines and gas utilities.

According to TIPRO’s analysis, direct Texas upstream employment in October represented growth of 36,500 jobs versus October 2021. That included an increase of 8,100 in oil and natural gas extraction and 28,400 jobs in the services sector.

“The Texas oil and natural gas industry continues to provide unmatched support for the state economy and our nation’s energy security,” said TIPRO President Ed Longanecker. “Energy produced in Texas has also helped our European allies in a time of crisis.

“State and federal policies should reflect the need for reliable energy and growing global demand for oil and natural gas,” he said.

TXOGA President Todd Staples said the state’s “oil and natural gas producers are steadily adding jobs as our state’s economy continues to strengthen even amid high inflation, a testament to our state’s free-market principles and the oil and natural gas industry’s commitment to producing the fuel and products that power modern life.

“Even as global unrest persists, this industry’s focus on providing energy security and economic strength for our state and nation remains steadfast.”

Since the low point in September 2020, when the pandemic decimated oil and gas employment nationwide, upstream oil and gas jobs in Texas, the largest producing state, have outnumbered losses by 22 to three, according to TXOGA.

TIPRO said there were 11,904 “active unique jobs postings for the Texas oil and natural gas industry in October, including 3,742 new job postings added in the month.”

Of the 14 specific industry sectors that TIPRO uses to define the state’s oil and natural gas industry, “Support Activities for Oil and Gas Operations” dominated the rankings for unique job listings in October.”

Support Activities jobs had 3,823 postings last month, followed by Crude Petroleum Extraction (1,573), and Petroleum Refineries (1,143), which indicated “a continued emphasis on increasing exploration and production activities in the state,” the association said.

The three cities by total unique oil and natural gas job postings were Houston (4,582), Midland (1,043) and Odessa (564), said TIPRO. Midland and Odessa are in the heart of the Permian Basin.