A Message from Todd Staples…

Economic forecasts, federal updates and state based shared misery dominated the discussions. A common theme amongst state leaders and industry representatives is the onslaught of continued and expedited federal overreach.

One thing became even clearer: the analytical work of TXOGA members through our Association’s standing committees is a crucial defense. As anti-fossil fuel forces’ devious schemes continue to have an inordinate influence over federal, state and local polices and regulations, a unified industry must provide thoughtful and meaningful science based solutions to the challenges being discussed. 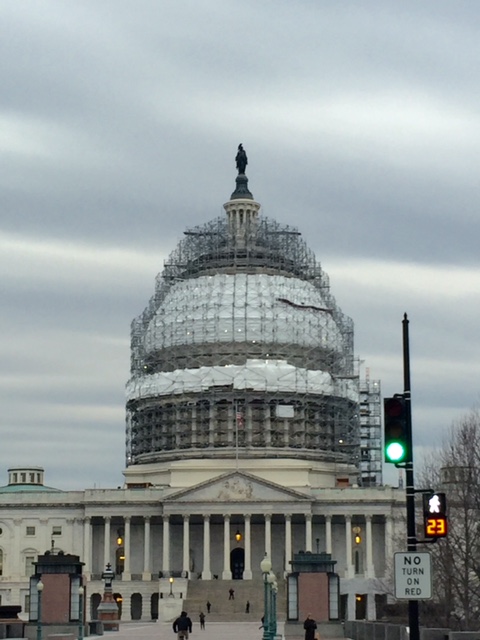 If you haven’t reviewed your company’s participation in the TXOGA committee structure, please contact Director of Membership Neal Carlton at ncarlton@txoga.org to ensure the work of our committees reflects your company’s priorities. earer: the analytical work of TXOGA members through our Association’s standing committees is a crucial defense. As anti-fossil fuel forces’ devious schemes continue to have an inordinate influence over federal, state and local polices and regulations, a unified industry must provide thoughtful and meaningful science based solutions to the challenges being discussed.

On February 29, TXOGA staff attended an Oversize and Overweight Stakeholders Workshop at TxDOT to learn about TxDOT’s process and responsibilities in determining oversized/overweight (OS/OW) truck fiscal notes as well as current studies and interim activities being conducted. TxDOT will hold individual industry meetings and additional workshops throughout the year. It is anticipated the next workshop will be in July.

The roundtable heard from researchers with the Center for Transportation Research discussing how they evaluate OS/OW truck issues. Specifically, different configurations of trucks, and calculation of bridge and pavement impacts.

On March 1, Todd Staples and TXOGA staff met with Sunset Commission staff. The staff is preparing their recommendations and is seeking feedback from industry on different issues including the Railroad Commission name change, moving hearings to State Office of Administrative Hearings and changes to the Railroad Commission self-funding structure. We expect to see a staff report by April.

On March 3, while in Washington, D.C., to attend Energy Council’s Federal Energy and Environmental Matters Conference, Todd Staples met with API President and CEO, Jack Gerard, to discuss industry matters and what is being done at both the national and our state level to promote the industry. In addition, they discussed aspects of the TXOGA/API pilot project that is underway in Texas. TXOGA staff also met with API’s Office of General Counsel to discuss important matters in common and to seek advocacy alignment.

On March 3 and 4, Todd Staples and TXOGA staff attended Energy Council’s Federal Energy and Environmental Matters Conference. While in D.C., they hosted a dinner for Texas legislators and attended the conference’s many important presentation topics, including the keynote address by Dr. David Knapp, Chief Energy Economist for the Energy Intelligence Group on the “State of the Oil Market” and a panel presentation on “EPA’s Proposed Methane Rules”. On Saturday, House Energy Resources Committee Chairman Drew Darby will join a panel to discuss state and federal legislative responses to the Clean Power Plan. 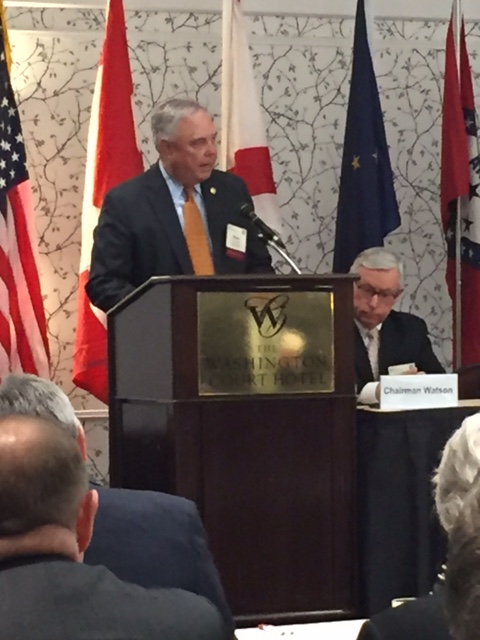 Texas State Representative and Chair of the Texas House Energy Committee Drew Darby (R-San Angelo) addresses The Energy Council’s 2016 Federal Energy and Environmental Matters Conference. Darby now serves as Vice President of The Energy Council. A link to the agenda for the conference can be found here.

On March 4, TXOGA staff and members attended a meeting with the Office of Management and Budget (“OMB”) to provide further feedback on its review of the Bureau of Safety and Environmental Enforcement’s (“BSEE”)recently published rule on well control. Our feedback tracked our written comments submitted in July 2015 to focus on effective safety requirements, cost of compliance, and economic impact.  Our main message at the meeting was to encourage OMB to direct BSEE to revise the proposed rule and reopen the public comment period to address the many procedural, technical, and economic flaws in the current proposal.

The Texas Comptroller’s office has announced that the low-producing oil well credit is about to kick in because of low prices.  A similar credit for natural gas production has been in effect for over a year, but this will be the first time in history that the oil credit will turn on.  It will likely be 25% for the first month of effectiveness, and could rise to 50% in subsequent months.  Both the oil and gas credits are triggered by low prices.  However, as you know, administratively, the two taxes are different in operation.  Most gas tax is paid directly by producers, and each gas well is a separately tracked unit.  With oil, the lease is the basic unit of production and small producers often have their tax paid by the “first purchaser”, who may be affiliated more fundamentally with midstream or downstream operations.  The credit will undoubtedly have value to producers but could create first-purchaser administrative issues for that have not yet been fully thought out. Here is a link to the updated price. For reference, the oil credit is found in Tax Code, §202.058. The gas credit is in Tax Code, §201.059.

We seek a meeting of interested members to examine this issue and then a subsequent meeting with the Comptroller’s office on implementation.

Bob Adair with Phillips 66 and representing TXOGA is the Chairman of the Tax Relief for Pollution Control Property Advisory Committee at the Texas Commission on Environmental Quality. The Tax Relief for Pollution Control Property Advisory Committee was established by the Texas Legislature to provide recommendations to the TCEQ on matters relating to use determinations for pollution-control property/equipment and the implementation of Texas Tax Code (TTC) Section 11.31. The advisory committee is made up of members selected to represent the following groups: industry, appraisal districts, taxing units, environmental groups, and members who are not representatives of any of those groups but have substantial technical expertise in pollution control technology and environmental engineering. Click here for a link to the 2015 report released this week.

TXOGA continued promotion on social media of the 2015 tax rollout and op-ed and also encouraged voter participation in Tuesday’s primary election. If you haven’t already, please Like TXOGA on Facebook and Follow TXOGA on Twitter and encourage your companies to do the same!

TXOGA PAC will host a fundraising luncheon for Chairman Todd Hunter, Representative for District 32 and chairman of the powerful Calendars Committee, on Wednesday, March 9, 2016 at TXOGA. Please RSVP to Lisa Lucero at lisa@txogapac.org if you are a PAC Member and/or a TXOGA Member with contribution for Representative Hunter. Luncheon will start at 11:45am and end at 1pm

Todd Staples and TXOGA staff hosted an election watch on Tuesday, March 1, 2016. Please find the election outcomes for the slate of candidates endorsed by the TXOGA PAC:

Turnout was heavy for both parties in Tuesday’s Texas Primary Elections fueled by the “Super Tuesday” Presidential elections, which were very much in play in Texas for Republicans and Democrats.

US President -Ted Cruz led the Republican Presidential Primary in Texas with 40.6% of the vote, followed by Donald Trump with 28.07% and Marco Rubio at 18.42%. Hillary Clinton carried the Democratic Primary with 65.18% to Bernie Sanders’ 33.18%.

2 Incumbent Members of Congress are Not Seeking Re-election:

The Senate currently has 20 Republicans and 11 Democrats. 15 incumbents are not up for re-election until 2018. 16 of the 31 Senate districts are up for election in 2016. Of those, two incumbents are not seeking re-election; nine incumbent Senate members have no major party opposition in the Primary or the General Election. Only three incumbents had Primary opponents, all were Democrats, and all defeated their Primary opponents. There will be Republican Primary run-offs in both of the open seats.

2 Incumbent Members of the Texas Senate are Not Seeking Re-election:

The Texas House has 99 Republicans and 49 Democrats – two Democrats have resigned and their seats are vacant – Representatives Ruth Jones McClendon (District 120) and Sylvester Turner (District 139). The Special Elections will be on May 7, 2016.

All 150 members of the Texas House are up for re-election in 2016. 13 incumbents did not seek re-election. 43 incumbents faced Primary Election challengers – 33 Republicans and 10 Democrats. 4 of those incumbents were defeated in the Republican Primary; and 3 incumbents will be in run-off elections on May 24, 2016. There will be run-offs in 7 of the open seats.

4 Incumbent House Members Were Defeated in the Primary

3 Incumbent House Members Will Be in a Run-off:

13 Incumbent Members of the Texas House are Not Seeking Re-election:

In an effort to have a truly unified industry voice in Texas, TXOGA is working to recruit new members. If you know of industry counterparts that are not involved in the work of the Association or are former TXOGA members, please contact Neal Carlton at ncarlton@txoga.org. If your company would like to make changes to your representatives who serve on TXOGA committees, please email Neal. We can also send you a current breakdown of those from your company serving on committees, if desired.

Membership dues invoices were sent out in December. If not already processed, please pay your dues immediately and contact Neal with any questions.

If your company is not already maximizing savings by being a part of the industry’s largest workers’ compensation insurance program in Texas, please contact Jim Sierra at jsierra@txoga.org today to obtain easy information on the best way to access this program.

Join us for the Energy Elevated Technology Showcase